Parkersburg, West Virginia is home to The Weeping Woman, a graveyard statue that is the focal point of dozens of local legends. The following are a few of the letters we’ve received detailing this impressive statue’s fantastic tales.

In Parkersburg, West Virginia there is the legend of the statue of “The Weeping Woman.” The statue is located in Riverview Cemetery, and watches over the family plot of the Jacksons, a prominent family in Parkersburg who were cousins to famed Civil War General Stonewall Jackson. A number of unexplained powers are associated with this curious statue. Some say that at night during a full moon, the statue stands up and walks through the graveyard, weeping over the conflict between North and South. Others claim to have seen her move and have photographed her hands in different positions. We love this graveyard. Let it thrive. –Hellface 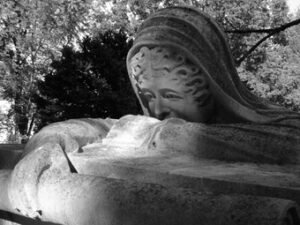