The Garden of Eden

If you thought the Garden of Eden was somewhere in the Middle East, forget it, it was in Bristol, Florida––or so the legend goes. I heard about this astonishing revelation a few years ago, and decided to check it out for myself. Bristol, located in Liberty County, looks like any other small town in northern Florida, except this was where Adam and Eve got their start according to the late Elvy E. Callaway, a Baptist preacher during the fifties. Sure it sounds far-fetched, but hang on a moment, Reverend Callaway may have been on to something…or perhaps on something.

Reverend Callaway studied the area for fifty or more years, and discovered a significant number of features that match the Bible’s description of the Garden of Eden. He pointed out that Genesis 2:10 states that “a river went out of Eden to water the garden; and from hence it was parted, and became into four heads.” That sounds exactly like the Apalachicola River, which does indeed split into four rivers…or more if you count every little tributary along its course.

Callaway claimed that only two rivers in the world fit this description, one in Siberia, and the Apalachicola. I doubt that Eden was in Siberia, it’s too cold there. Adding a bonus to Callaway’s theory is the Torreya tree, the only place in the world where these rare trees grow is near Bristol, Florida. And what is the Torreya tree? It’s also called the gopherwood tree, as in the kind that Noah used to build the ark. These rare trees, a conifer variety scientifically known as Torreya taxifolia, were discovered in 1834 by Hardy Croom, a local farmer and amateur botanist. When Croom could not identify the trees he contacted renowned botanist, Dr. John Torrey, of Columbia College. The Torreya is named for Dr. Torrey who officially declared the trees a newly discovered genus. These trees once grew worldwide before the last ice age, and why a small number have survived in Florida is a real mystery. In 1933, the state legislature passed a law protecting the Torreya. The only place you can see these unusual trees is the alleged site of the Garden of Eden and a few miles up the road at the Torreya State Park.

The Apalachicola River has cut a wide valley through this part of the state in which grows an impressive range of botanical species that are found in no other part of Florida. Callaway, taking an extra step in his research, identified twenty-eight trees growing here that are mentioned in the Bible. Of course one might point out the absence of apple trees, and demand to know where Eve got the apple that she ate? But local advocates of the Garden of Eden theory will quickly point out that Genesis makes no mention about an apple. That’s right, Eve ate from the Tree of Knowledge…and I’m sure it’s growing somewhere around Bristol.

In the early 1950s, followers of Reverend Callaway erected an entrance to the Garden of Eden and made nature trails through the woods and along the bluffs overlooking the Apalachicola River. There were signs identifying various points of interest, including one that proclaimed the place to be the birthplace of Adam. Callaway’s Garden of Eden attracted so many visitors that he was approached by a promoter suggesting it be developed as a tourist attraction. In 1971, Callaway published his Eden theory in a book titled “In the Beginning.” Reverend Callaway died at the ripe age of 91, and as time went on, his Garden of Eden kinda fizzled-out…but the Garden, or at least the woods, is still there. I wanted to see this place for myself; after all, the roots of creation may have been in Liberty County. It was worthy of a quest, and perhaps I could find the Tree of Knowledge and take some fruit home.

I pulled into Bristol and asked a gas station attendant who looked a little bit like Moses, for directions to the Garden of Eden. Although Genesis makes no mention of gas stations, I was surprised when I got a response without being laughed out of town. “Go back down the road and take Route 270 north a few miles,” directed the attendant. “You’ll see Garden of Eden road on your left, just take it to the end.” Obviously Bristol is used to getting curiosity seekers looking for the Garden of Eden.

I drove out Route 270 and almost missed the small sign for the Garden of Eden Trail. At the end of the road I found a parking area and an information kiosk, but there was no mention about the place being the original Garden of Eden. Today this is a preserve owned and managed since 1982 by the Nature Conservancy. I looked around and all I could see was a high, dry, scrub of sand pines, turkey oaks, and palmetto bushes. It certainly didn’t look like the Bible’s version of the Garden of Eden. Nevertheless, I hiked a winding trail for about fifteen minutes, the sand hill pinelands gave way to a lush forest of beech, magnolias, dogwood, holly, laurel, and tall, robust hardwoods that were thriving like crazy in this fertile place. I continued on a narrow path that trailed the edge of a deep ravine, its slopes were covered with ferns and laced with purple flowers of wisteria and white dogwood blossoms. I looked down into the basin of this ravine and saw two colorful butterflies flittering about over a crystal-clear stream of water. The place really did look like a natural garden and I was amazed at how the environment had changed from sparse pinelands to this flourishing forest in just a short hike from my car. Now if you are wondering about serpents, I did see a large indigo snake, but he wasn’t coiled in the branches of the Tree of Knowledge. I also saw a gopher tortoise, but Genesis doesn’t say anything about gopher tortoises, just gopher wood.

I eventually came out to a bluff overlooking the Apalachicola about 150 feet below. Nothing about this landscape looked like Florida; actually it reminded me of a river valley I once saw in Honduras. I scooped-up a handful of reddish clay, the kind Native Americans fashioned pottery from, and figured this could have been the dust used to create Adam. I also wondered about Cain slaying his brother Abel, was Abel buried around this place? And what about Cain who was kicked out of Eden? The Bible says that after slaying his brother, Cain “dwelt in the land of Nod, on the east of Eden.” Well they may have called it “Nod” back then, but east of the Garden of Eden today is the Liberty County Correctional Facility. I guess that would be an appropriate place for Cain.

One of the reasons why the Nature Conservancy purchased the 1,300 acre Garden of Eden site for preservation is because of its diversity of plant and animal life. I can’t say for sure if Elvy Callaway’s theory was correct, but in county property records the official legal description for this property is “The Garden of Eden Tract.” Therefore, I guess it really does make it the Garden of Eden. 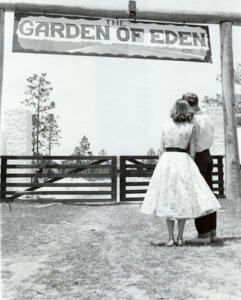