They say love is fleeting, but one resident of Hiawatha, Kansas, set out to prove them wrong. When Sarah Davis died in 1930, her loving husband John Milburn Davis began erecting a memorial unlike any other. The Italian marble memorial in Mount Hope Cemetery contains statues depicting Sarah, John, and a few others, and was estimated to cost more than $200,000—and that was at the height of the Great Depression. Many regarded the widowed man as foolish and selfish for spending so much money on a grave during such economically desperate times. But Davis was also a secret benefactor to residents of Hiawatha who had fallen on hard times, and his private donations garnered less attention than his wife’s grave. The Davis Memorial still stands today. Hundreds of people travel to Hiawatha to visit it each year.

The Headless of the Household

There is a headless statue in front is John Davis kneeling at the foot of the grave of his beloved Sarah. The head was stolen by vandals several decades ago, possibly by townspeople who were incensed over Davis’ spending money so ostentatiously for this memorial. The town’s leaders have not yet given up hope that the head will some day be found.  –Frank Thompson 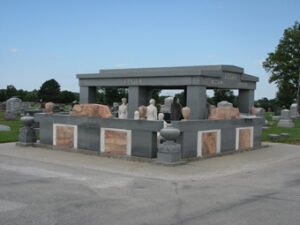