The brochure reads, “The Rosicrucian Order is a worldwide philosophical and initiatic tradition that offers time-tested techniques for re-discovering the wisdom, compassion, strength and inner peace that already reside within each human being.”

That all sounds good, but the message would seem a lot more serious if there wasn’t a statue of a saggy breasted hippopotamus in a pharaoh’s hat outside the doorway to this establishment of enlightenment.

One does not need to be searching for mystical, spiritual or scientific answers to enjoy the serenity of the Rosicrucian Park, though the Rosicrucian Order does claim it can help you on those quests. The park takes up a full city block, and the combination of Egyptian and Moorish architecture and landscaping is undeniably both mysterious and striking.

Sphinxes, pyramids, planetariums, and Grand Temples all seem strangely out of place on Naglee Ave., in San Jose, but once inside the grounds of Rosicrucian Park, San Jose suddenly feels out of place.

In 1915, businessman and occultist Harve Spencer Lewis announced to the world that Pharaoh Akhenaton’s secret society was now taking applications. The society was known as the Ancient and Mystical Order Rosae Crucis (AMORC), or “The Rosicrucians,” and Lewis was its Imperator, or head.

AMORC claimed to have been founded by the apostate Akhenaton, generally credited as the first monotheistic sovereign, in ancient Egypt. From there it worked through Western history in 108-year cycles of public and private activity, making an especially strong splash in the Renaissance, when the followers of the legendary “Christian Rosenkreuz” antagonized the Church with their faith in reason, personal enlightenment, and a coming New Age. Many great men in history had allegedly been members of the secret society, and with the 20th century underway, the group’s leaders had apparently decided it was once again time to resurface and open their membership to the masses.

But there were already several “Rosicrucian” groups in existence in 1915, and many of them disputed Lewis’ group’s claims to antiquity and authenticity. Included among the disputants was the notorious English occultist Aleister Crowley, who claimed that Lewis was a poseur and con-man who, after acquiring a plethora of dubious esoteric titles and initiations, had lifted the teachings of a German “sex magick” cult and claimed them as AMORC’s own.

But Lewis persisted, and AMORC thrived, dispensing its “ages-old wisdom” by mail to dues-paying members. Their ads still appear in countless magazines, promising the secrets of “cosmic consciousness” to sincere seekers. Since AMORC denies that it’s a religious organization, it avoids the whole process of “converting” recruits––a major factor in its success.

AMORC’s international headquarters occupies a city block-sized, park-like compound in San Jose. All of the buildings have been designed to look like Old Kingdom shrines and temples, reflecting the Rosicrucian love of things ancient Egyptian. The park’s elaborate fountains, tiled walkways, gardens and statues also faithfully evoke the Land of the Pharaohs.

Not surprisingly, the park’s biggest attraction is the Rosicrucian Egyptian Museum, the largest collection of ancient Egyptian relics in the Western U.S. The museum displays relics, statuary, mummies, and a life-sized replica of a rock tomb, along with several multimedia exhibits depicting daily life in ancient Egypt. Babylonian and Assyrian items are featured as well.

Next door, the Planetarium presents AMORC’s vision of the universe and the future. The planetarium is a structure of Moorish design, which honors Arabic astronomers. It contains a “star projector” that can project over 2100 stars, planets, and other extraterrestrial wonders. It has the ability to modify the sky forward or backward in time 13,000 years. There is also a Foucault Pendulum inside, and everyone loves a Foucault Pendulum. Especially Foucault.

The Theatre of the Sky features astronomical lectures and light shows in a large, domed auditorium. Space-exploration exhibits in the lobby express the traditional Rosicrucian interest in science and technology updated to the era of moon landings and space stations. And, closed to public eyes, there are the other grand Egyptian-style buildings.  There’s the Research Library, which houses thousands of rare books on mysticism and the occult. Rose-Croix University is here as well, along with the massive, secretive Supreme Temple.

But the real nerve center of AMORC Rosicrucianism is the administrative buildings. Here, a computerized business operation processes millions of pieces of mail every year. A permanent, full-time staff keeps track of tens of thousands of members in almost every nation on earth, and coordinates the activities of the hundreds of AMORC Lodges and study groups in 87 countries. A sophisticated Web portal at www.amorc.org points Internet surfers to Rosicrucian readings, activities and merchandise.

Thirty-five centuries after Akhenaton introduced ethical monotheism and initiatory wisdom to the world, the San Jose-based Rosicrucians have carried on his work to become the Mystery School for the Global Village. The Rosicrucians do not claim to be a religion, but rather a mystical association. If that sounds to you like they sell literature and accept a “small fee” from students then you are already well on the path to metaphysical oneness, but don’t let that prevent you from enjoying the park. It really is an interesting and peaceful place. 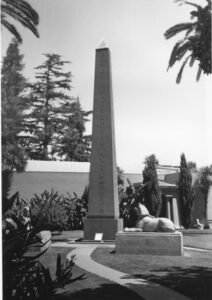